I've been working more on pangoterm, and it now has two important features that bring it much closer to being a real usable terminal.

The first is that it now supports a lot more configuration by command-line, and also the same things by a configuration file. Support for a config file isn't something I personally have directly needed so far, mostly because the compiled-in defaults are already what I'd like. But it's something other people have been asking for, and this helps support other users too, so it's nice to have.

I also found quite a neat way to implement it too, requiring just one line of macro to declare the existence of a configuration setting and give its default value and help description. This then creates a normal variable that can be read in the usual way:

The other main feature that's now in place is scrollback buffer. Now, whenever text disappears off the top of the screen it is saved, and can be recalled again by scrolling the mouse wheel or using the Shift-PageUp and Shift-PageDown keys. A small custom-drawn indicator shows the scroll position without needing to consume any screen space in the normal state of not being scrolled. 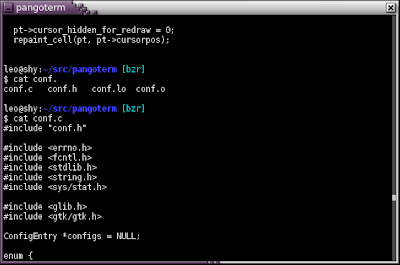 I also found and fixed an almost embarrassingly-bad bug around the redrawing code. When erasing cells, it used to make one cairo call for every cell to be erased, leading to many calls whenever an entire line had to be cleared. Now it composes multiple blank cells with the same pen, in the same way as it composes multiple cells of text; and is faster when scrolling partial lines, and so on.

While I've already been using it quite a lot lately to run the vim I use to edit its own source code, for some tasks I've still been using xterm. But not any more - with the addition of scrollback to pangoterm, I find I'm now using it for everything. It's become my default terminal both for home and work use.