The latest release of Tickit, version 0.18, adds support for floating windows. These are windows that rather than divide space of their parent window, instead float above it by obscuring content below, creating a Z-ordering. Drawing operations on windows are aware of clipping regions caused by floating windows above them, and are accounted for automatically without individual widgets needing to be aware of it. 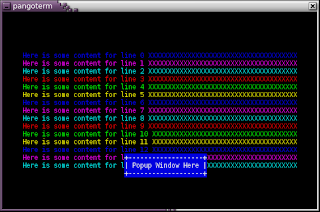 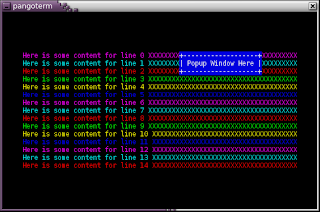 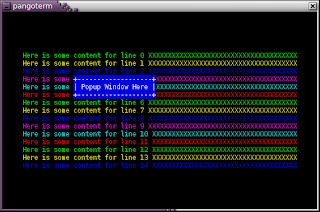 A special kind of floating window called a popup window can be created. These are always created as children of the root window, and take first priority at input events. These can be used to create things like popup menus, such as this early prototype of Tickit::Widget::Menu. 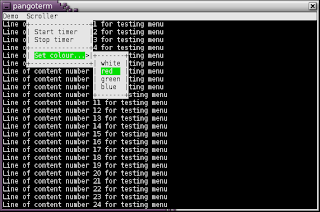 This is still somewhat of a work-in-progress, and by the time it's released it should support proper Unicode linedrawing rather than the ASCII variant. I'm also planning to create a way to make pop-up windows of arbitrary widgets, to create things like modal dialog boxes.
Posted by LeoNerd at 12:57 No comments: