(If you don't want to read the boring history you can skip to the end...)

Mouse in terminals. It's often been a mess. Traditionally terminals just send some ASCII-like representation of the keys you press, and mouse doesn't easily fit that. Therefore, when DEC first started adding mouse ability to terminals, they had to find a way to encode events into the byte stream.

They decided on a CSI sequence. Despite that CSI sequences can include numeric parameters, they decided the encoding should be a simple CSI M with no arguments, followed by three plain bytes which encode the buttons and position (for reasons that I suspect are lost in the mists of time). These three bytes encode, in order, a bitmask containing the button event and modifier keys, then the line and column number. In order to avoid sending C0 bytes within the stream for these, each byte is offset by adding 0x20 to ensure it's not a C0 control byte. This has the downside of leaving atmost 224 (256 - 32) columns or lines that can be encoded. On your traditional 80x25 glass teletype of course that was not a problem, but with today's 30inch widescreen monitors, it's easily possible to make a virtual terminal wider than this limit.

To solve this, a few extended encoding schemes have been invented. The first was the somewhat bizarre encoding simply named "Extended Encoding". This encodes the three values not as single bytes, but as UTF-8 encoded characters. This has a number of downsides, most notably the fact that it cannot be recognised unambiguously as compared to the other ones, so it's best to avoid it. Next are two largely-similar schemes that both use the parameters of CSI sequences to encode the parameters of the mouse event. rxvt encoding simply uses CSI M with the three values as CSI parameters, whereas the nicest of the encodings, so-called SGR encoding, uses either CSI < M or CSI < m to encode button press vs. button release. This fixes the other shortcoming of all the other encodings, in that SGR encoding can encode which button was released on a release event, whereas all the others can only encode that it was a release.

I recently got around to implementing these in my two main terminal-related projects; libvterm and libtermkey. libvterm (demonstrated here via pangoterm) can issue mouse events in any of these encodings if requested by the application. libtermkey will automatically recognise basic, rxvt and SGR encodings automatically, but won't handle the "extended" UTF-8 encoding, because it can't be unambiguously identified from basic.

And now without further ado, here is a rather uneventful screenshot that shows an enormously wide pangoterm demonstrating mouse events past the 224th column. 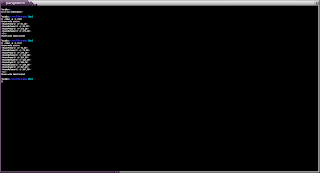 And in case the text is a little small to read here, it looks like this:

Should work on a recent xterm etc.. as well.