Lately I've been working more on pangoterm again. A few days ago I was feeling oddly artistic, and decided to draw an icon for it, to distinguish it in window lists, etc.. 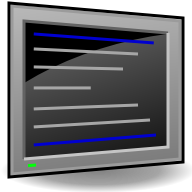 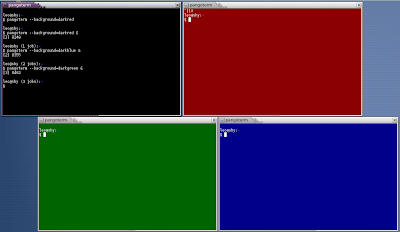 So I did that.

By a little bit of custom CSS hackery, it loads the SVG via a stylesheet that overrides the fill colour of the background colour element, and sets it to the colour chosen by that terminal. The upshot here is that the icon used in the workspace switcher, window list, and other places, looks like the terminal window.

Lately I've been looking at trying to finish the effectively half-finished effort that DECSTBM, IL and DL give us, by extending it with column awareness. I notice that VT420 gives us these things; namely DECSLRM (set left/right margin) an analogy to DECSTM, and DECIC/DECDC, to insert or delete a column. Using this combination, you can define an arbitrary scrolling rectangle using DECSTBM+DECSLRM, then scroll it in any of the four directions by placing the cursor in the topleft corner and issuing IL/DL/DECIC/DECDC as required. The VT420 manual says that the terminal defaults to a mode wherein "Left and right margins cannot be changed." (DECVSSM; vertical split-screen mode). You have to enable it first by issuing CSI ? 69 h.

This scheme allows us all sorts of new abilities, such as:
(Both of these abilities I would verymuch like ;) )

However in actual practice it's not quite as simple as this. DECSLRM is encoded as CSI s, to follow DECSTBM at CSI r. This creates a problem because ANSI.SYS defines CSI s as SAVE, an operation identical to DECSC.

So what to do about this problem? My initial thought was to say "ignore ANSI.SYS", and support just the DEC scheme. I feel that arbitrary scrolling is too important a feature to be lacking for the sake of this legacy compatibility.

I can therefore see a number of possible ways out of this:
My votes in preference are 3, 2a, 1; and thereafter the rest all sound horrible. But I'd be interested in hearing what ideas anyone else has...
Posted by LeoNerd at 16:11 No comments: